Songs in the Key of G

Songs in the Key of G

Through the exquisiteness of nature, God touches us in incredible ways. Music also represents a way for God to be in touch with us. And often, it is through music that God delivers us from our afflictions. The scripture urges the whole earth to sing to the Lord! … Proclaim the good news that he saves.

As I was standing in my kitchen one morning listening to the news on the radio, I heard a variety of grim reports. All were depressing. All were sad. The only thought I had was “Have mercy, God.” When the news was over, a song began to play. The lyrics went something like this:

“There’s a day we all face that depletes our strength, and our hearts can hold no more weight. When the source of our faith is not sure anymore, nothing left to do or to say. Have no fear. God’s in control! God has the very last say so!”

I responded in praise, for I believe indeed God has the final say in matters about his beloved. 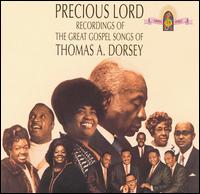 Thomas A. Dorsey understood this when he wrote “Precious Lord,” a song in which he praised God through his grief. Throughout his early years, Dorsey felt torn between the sacred and the secular. Filled with wanderlust, young Dorsey left Georgia as part of the Great Migration from the south to the north. When he settled in Chicago, his schedule was hectic and his lifestyle unhealthy. He soon suffered a nervous breakdown at the age of 21. After undergoing a spiritual transformation, however, Dorsey recovered from his condition a few years later and turned his attention exclusively to sacred music. Then tragedy struck.

One evening while he was playing at a revival in St. Louis, he received a telegram informing him that his wife had died in childbirth and that their child had died soon after. Consumed by grief, the young artist stopped writing for a while, reporting that he felt he had been abandoned by God. One night, a friend visited Dorsey and arranged for him to be left alone in a music room with a piano. He spent some time in the solitude of that room. And after a while, Dorsey recalls feeling at peace: And I quote:

“I felt as though I could reach out and touch God. I found myself playing a melody, one I’d never heard or played before, and words [for “Precious Lord”] came into my head—they just seemed to fall into place.”

Today, Thomas Dorsey’s “Precious Lord” has been called “the greatest gospel song of all time.” For so many people, including myself, the song expresses a profound message of hope and faith. It is a song in the key of God.

Not only should we praise God through our grief, but we also should praise God through our gladness. Ludwig von Beethoven and Henry Van Dyke could attest to this. Beethoven (1815–1827) lived a troubled personal life and started to lose his hearing when he was about 28 years of age. He was often depressed and from time to time contemplated suicide. Many people who appreciate Beethoven’s music have said that they discern echoes of the man’s life in the movements of the man’s music. His was a life of struggle followed by triumph. Beethoven’s 9th Symphony is considered to be one of the composer’s greatest accomplishments.

Later, Beethoven’s music was combined with lyrics written by poet and preacher Henry J. Van Dyke (1852–1933). The resulting hymn was entitled “Joyful, Joyful, We Adore Thee” and was first published in the Presbyterian Hymnal in 1911. Again, this hymn expresses trust and joy and hope.

We’ve seen so far that we should praise God through our grief and through our gladness, but we should also praise God through our gratitude. Horatio Spafford (1828–1888) understood this when he wrote “It Is Well with My Soul,” a song that grew out of his reaction to a personal tragedy. His four daughters were killed in a collision with another ship at sea. Spafford’s wife, alone, survived. Deeply touched by God’s mercy, Spafford was able to say, “It is well with my soul.” And shortly afterward he penned this song of praise.

God of Grace, no matter what my situation, all is well with my soul. I can praise you with songs in whatever key you have given me. Each day I will sing of your goodness and your grace. Amen.